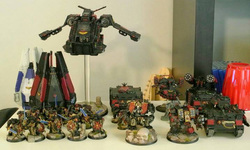 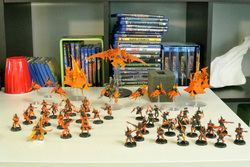 I have two ironclads, the stormtalon, and the drop pod with emp champ in reserve.  I deploy the stalker and predator on the left, the rhino on the right, and infiltrate the scouts on the right side.
He holds the talos, 1 unit of warriors, razorwing, and wyches in reserve.  He deploys heavily on my left flank, with two units of jet bikes, and two raiders facing vs the predator and stalker.  He places the raiders for excellent cover.  We roll night fighting turn 1.
I win turn 1 and decide to go first.  Dark Eldar fail to seize.  The relic is placed under the central piece of terrain. 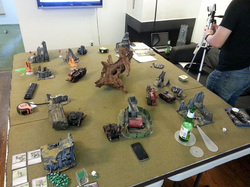 Movement Turn 1 BT:
I drop one ironclad by a ruin to engage a unit of bikers.  (I tried to pick spots where he couldn't shoot their rear armor).  The second I drop behind the raider with it's back against LOS terrain.  6 inch disembarking is awesome now!
I move the scouts towards the relic and disembark them.  I adjust the position of the rhino, predator, and stalker for fire lanes. 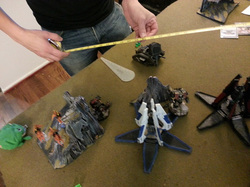 Shooting Turn 1 BT:
The stalker and predator fire away, but do nothing to the raiders with basically 3+ cover saves.  I run the scouts to get to the relic.  The ironclad wiffs on the raider (or did a single glance), the other ironclad wipes out a unit of bikers, netting me first blood. (Yeah double hvy flamers!) 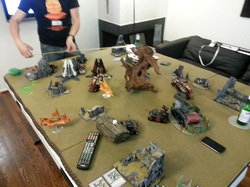 Movement  Turn 1 DE:
He moves the raiders up, and moves the bikes out of harms way. Now the ironclads are left behind with nothing to engage.

Shooting Turn 1 DE:
The bikes practically turbo boost across the entire map, hitting both the ironclad AND the scouts (which were almost at the relic).  They glance the ironclad, and wipe out 3 scouts.  The scouts hold.  (Wow I should have used both ironclads to wipe the bikes)
The raiders then open fire on the predator and stalker, hitting with lances and nasty weapons.  The predator is penned and suffers a shaken result.  The stalker is glanced. 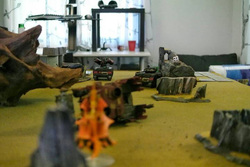 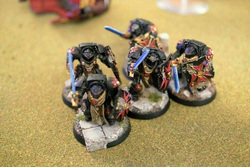 Reserves Turn 2 BT:
The emperors champ unit and terminators come in.  I decide to drop the drop pod with the crusader unit right next to the relic, so they can pick it up.  Might have made an error here, but I disembark the squad right on top of the relic (drop pod hits, and 6 inches disembark puts the sarg on the relic).

I then deep strike the terminators in between the two raiders, because I had no other targets and forgot they were open topped and full of guns.  That is what happens when you paint up pretty models people...you want to use them immediately. 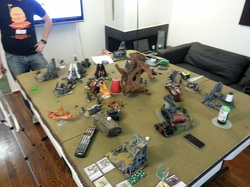 Movement Turn 2 BT:
I pull the stalker back so it is out of charge range.  I move the predator up to try and pot shot the second raider.
The scouts adjust to help support the BT main unit.
The ironclads start moving up to help defend the emp champ unit.
I move the land speeder storm to the side in case he drops the webway. (hvy flamer)

Shooting Turn 2 BT:
The stalker immobilizes the front raider.  (later we should out it should have exploded due to open topped, but just played it as immobilized)
The predator misses with it's snap shots.
The rhino lascannon fires and misses.
I make a mistake and run the BT's holding the relic.  (relic unit can't run, oops).
I run the terminators to spread them out in case there are any template weapons.
I run the ironclads 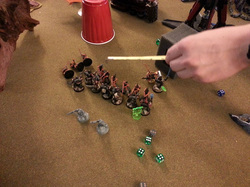 Movement Turn 2 DE:
The archon unit disembarks from the immobilized raider, immediately goes after the unit with the relic.  (photo is slightly wrong, he changed his mind and went after the emp champ unit after this was taken).
The talos moves up, the razorwing zooms on, he starts moving the wyches up the right flank (to intercept the emp champ unit).
The remaining functional raider adjusts to have the troops shoot at the terminators, and the lances at the predator.

Shooting Turn 2 DE:
The archon drops a webway portal right next to the relic unit.  (OH OH)
The archons unit unloads into the templars with the relic, killing a few, including the power sword guy (DOH).
The razorwing blows the land speeder storm away after finding out it can "blind" units.
The talos runs up trying to get into a position to lance one of the dreads.
The raider blows up the predator.
The warriors in the raider unload a ton of shots vs the terminators.  One terminator falls.

Assaults Turn 2 DE:
(We moved the giant terrain piece out of the way for the battle, since it was happening underneath it)
The archon unit assaults the emp champ unit! EPICNESS BEGINS!
Overwatch, I kill nothing.

The emperors champion challenges the archon to death by black sword.  The archon swings and hits a multitude of times.  I make all my saves and swing back and ignore his multitude of clones, slicing him clean in half with a str 6 slash causing instant death.
The remaining DE swing and hit, but fail to wound many, and I make my armor saves.  The templars and sword brother swing back, killing three more.  I win combat, and the DE fall back, and I fail at sweeping advance.  (I rolled low, they have a high init) 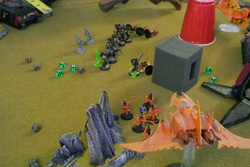 I consolidate further away, trying to get the relic back to my side of the table. 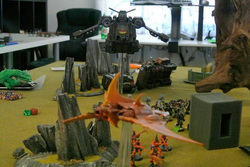 Movement Turn 3 BT:
I move the terminators up to engage the second raider.  The ironclads shift towards the webway, hoping their heavy flamers can help turn the tide from the swarm of units about to come in.  The templars move away from the webway, the rhino moves up to support, and I don't know what to do with two scouts, so they stay near the sword brother in case he drops the relic.
The stalker moves up to take out the raider the terminators want to smash, hoping to wreck it so they can take on the unit inside. 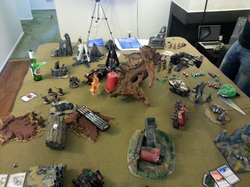 Shooting Turn 3 BT:
The stormtalon unleashes the emperors fury upon the razorwing, blowing it to pieces.

The stalker locks onto the other raider, and proceeds to tear it apart, exploding it, and killing a multitude of warriors inside.
The ironclads run up.  The drop pods shoot at the unit running away, killing one or two.  The rhino snap shots at the talos and misses. 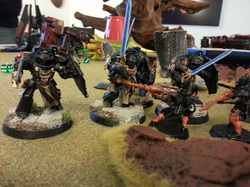 Assaults Turn 3 BT:
The emperors revenge.  The terminators smash into the shaken dark eldar warriors and show them the wrong of their ways, wiping them down to one guy, who runs away to warn the dark eldar of the templars.  The terminators consolidate towards the talos.  The other ironclad assaulted and wrecked the remaining raider...which we later found out should have been destroyed anyway.

I attempt to charge the unit fleeing, with an ironclad, and fail the charge.

DE Movement Turn 3:
Lelith and the wyches move up to assault the templars.  At this point we realize that games workshop hates assault armies, and you can't actually assault anymore after coming out of a webway portal.  Thanks GW.

The talos moves up.  The unit of wyches I forgot about finishes their flanking move, and ends up directly in the path I was traveling with the relic.  (oops).
The two groups of eldar warriors continue fleeing.

DE Shooting Turn 3:
The wyches unload on the templars with the relic...wiping out half of the remaining unit.  The fleeing DE snap shot and don't do anything.  The talos shoots at the terminators, and kills one.

DE Assaults Turn 3:
The unit of wyches on the right flank assault into the relic unit.  We tie combat, but I lose some more brothers, and the emperors champion takes a wound. 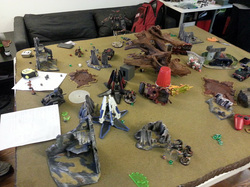 BT Movement Turn 4:
I swap the stormtalon to hover move and move it to angle shots at the Lelith's unit.
With no more skimmers left, the stalker moves to try snap shoots at targets.
The remaining ironclads move towards the large DE group that left the webway.  I disembark the guys from the rhino, and move the rhino to block the remaining DE from easily catching up with the relic unit.  The terminators move into assault range on the talos.


BT Shooting Turn 4:
The storm talon, the ironclad, and the rhino lascannon unit fire with purpose into Lelith's unit.  More then half the unit dies.  The stalker tries shooting at the talos and fails to hit.  The rhino moves flat out to block the wyches from easily reaching the relic unit.

BT Assaults Turn 4:
The ironclad assaults the remaining wyches in Lelith's unit to hopefully tie it up.  It kills a wyche, but they put a glance on it with a haywire grenade. The terminators try to assault the talos, and fail their charge.    In the ongoing templar vs wyches battle, a few more brothers die, and so do a few wyches.  Combat is tied.
Dark Eldar Turn 4:

DE Movement Turn 4:
The remaining units run off the board, all the rest are in close combat or destroyed.

DE Shooting:
Everything in close combat.

DE Assaults:
The ironclad gets wrecked by haywire grenades, the wyches consolidate with a 5, but are forced to try and go around the rhino, keeping them from the relic unit.  The terminators are assaulted by the talos, but he rolls a 1 for his extra attacks.  The talos takes a wound and the terminators are fine. 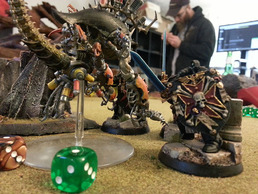 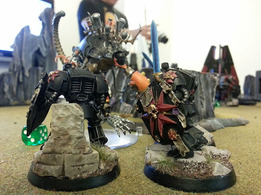 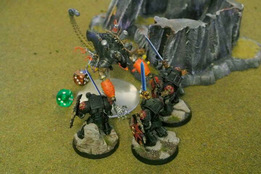 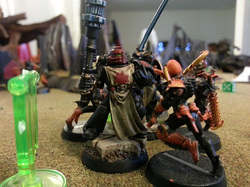 The ongoing assault gets down to JUST the sword brother and the emp champ, with two wyches left.

At this point our necron buddy arrives, and the DE player decides to call it, as I have line breaker, first blood, and warlord, and enough units to cut down the remaining DE in a round of shooting.   (I think he could have tied it given more time, depending on how many saves his other HQ could make).