A Bit of Background

Hey everybody!  I'm part of a local gaming group who started building our own tables/terrain setups when our LGS closed (and the local games workshops as well).  We originally started out as all of us do, with the most basic of surfaces, with random implements from the kitchen and garage as center pieces. 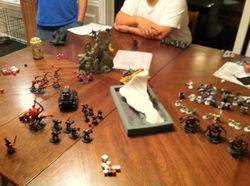 We started with misc bits of random objects on wood tables.  Our mini's were barely painted at this point. 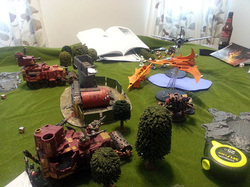 We moved onto the famous GW green mat.  I also like to call this the "itch" fest.  As the surface was extremely irritating to the skin.  (Don't lean on it!)

Each time, a moderate improvement.  The final table, though providing a nice textured surface, was far too large and did not like dice to be rolled on it.  (bounced like crazy).  Enter the gaming mat!

When I first saw the kickstarter for frontline gamings mat's, I was immediately interest in the city map.  We've been collecting building over the course of a few years, but they always looked out of place on the boards we had been using.  I was a bit hesitant to initially invest, as I had been burned by the games workshop mat, so I waited until after the kickstarter to see what the public s response would be.  (Plus 90% of all the kickstarters I've pledged, have yet to ship...).  My hesitation was unfounded, as the response was positive, and they shipped significantly faster then almost any company I've seen kickstarter.  I saw the city mat come into stock and immediately ordered.

The mat came in a cardboard tube which had some heft to it.  (about 10 lbs).  Open opening and laying out the mat, I was impressed by it's weight and thickness.  Those who have played with the GW mat know how thing and flimsy it is.  You have to pull it to lay it down. The frontline gaming mat just rolls out and lays right down.

(It's not heavy enough to cover up major surface imperfections on your table setup however.  If you use two tables next to each other, you'll need to pad the center to prevent a dip. )


The first thing you notice with the mat is the insane detail. 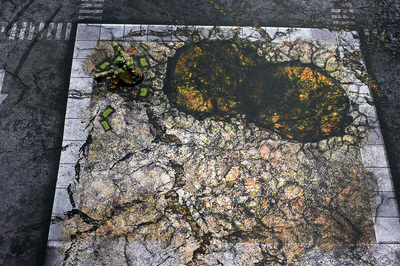 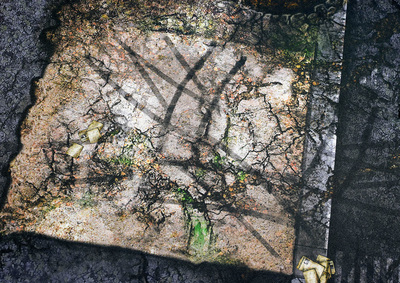 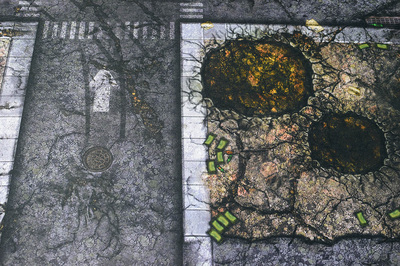 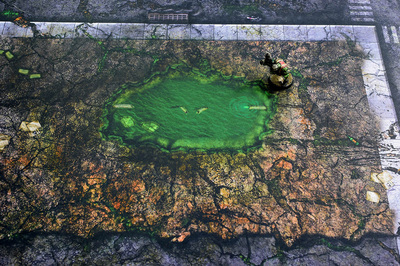 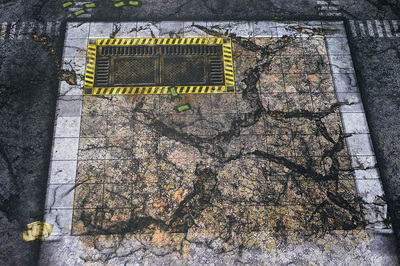 Then you start placing your mini's and terrain on it, and it just comes to life! 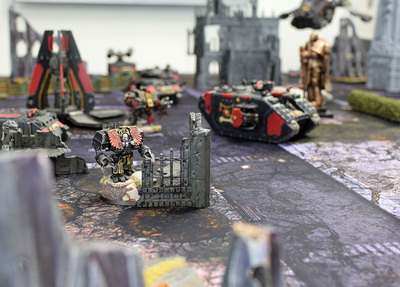 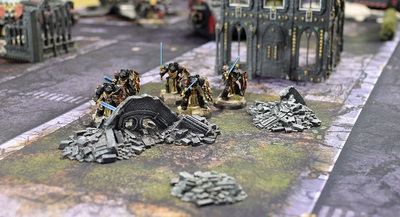 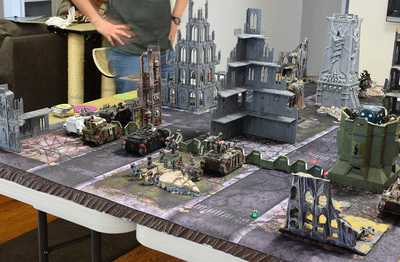 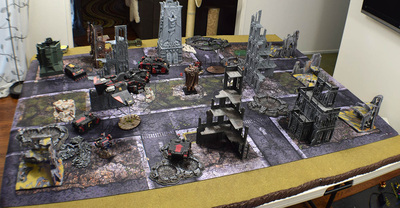 At first I was confused as to why there were flares on the board.  Then I realized (or cheated and read online), that they were deployment markers.  The city scape board has them built right in, so you don't have to interrupt terrain pieces just to figure out where line breaker or deployment is.

This is Hammer and Anvil (first crossroads) 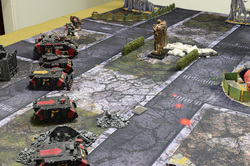 Spearhead (diagonal flares)
The deployment markers really just put the mat over the top.  Not only does it look great, but now you save a bit of time when setting up your games.  In terms of the durability of the mat, I can't comment on this yet, as we've only played a few games on it.  Time will tell!

Playing on the Mat

Last weekend was our first big game on the mat.  Full armies clashing on the battlefield.  Dice rolling everywhere.  This is where I first fell in love with the mat surface itself.  Having played on the textured gaming surfaces for awhile, I had gotten tired of dice constantly bouncing off the table.  In response to that, I had purchased dice trays to use in future games.  We ended up not using them once we played on the gaming mat (could have saved 15 bucks).  The mat absorbs the inital dice hit, so they tend to not bounce for a long period of time, resulting in a bit better rolling control.
The models also slide extremely well on it's surface.  Very useful when you are playing sisters of battle and have 7-8 tanks on the field.  Some people may find this smoothness a negative, I find it a positive.  It all depends on your particular preference.  My gaming group all loved the mat, and really enjoyed playing on it.  The shots from the battle are some of our best yet, and the battle report reflects that quality. It was an excellent purchase, and I'm glad I picked it up.  I hope you enjoyed this little review.

Cons:
Still need a flat surface (as with any mat) to lay it down on.  Laying across two tables will cause it to dip in the center where the tables meet.
The misses detects a slight rubber smell around the mat.  Assume it will disappear over time.

For a battle report using this mat, check.
Adepta Sororitas/Black Templars vs Necron/Dark Eldar
Back to Blog