Proxy Warning!
There are a number of proxy’s in this game. I wanted to try out some new units before buying the models, and buying/building/painting three annihilation barges is a pita). As such… The emp champ is my master of the forge, and the normal scouts are sniper scouts (for BT). For necrons, all the warriors on the board are immortals, the destroyers are wraiths, and anything with a flying base is an annihilation barge. If this offends you, skip this battle report!

Black Templar won the roll off. I choose to go second. We modified the relic mission slightly, just adding a secondary base objective in the deployment zones, to help break a tie. In reserve are my ironclad, terminators (with inquisitor), stormraven with BT CC squad and techmarine. 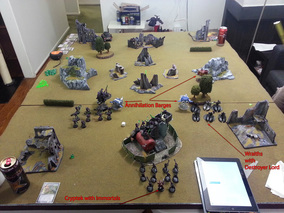 Necron side Deployment.
The Necron player spread out in his deployment (since he had princeps of deceit). 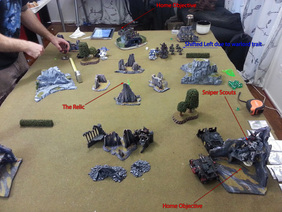 Black Templar Deployment
I counter deployed away from the wraiths, with a force concentration on the right, with the vindicator and predator having los. I deployed my one unit of crusaders a bit too far to the center though, which would be bad…

I attempted to seize, and rolled a 1…(never a good sign) 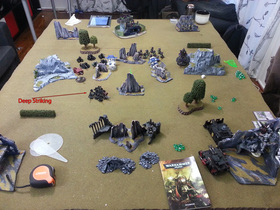 Movement
Everything shifts forward. The barges create firelanes and choose their targets. The cryptek uses the veil and deep strikes the immortals to engage the crusaders that are separated from the rest of the army. 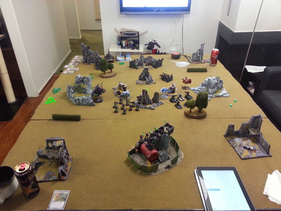 Shooting
The barges and immortals fire at the vindicator, predator, and crusaders. They wipe out 5 of the 6 crusaders, including the heavy weapon and sword brother, but the unit passes morale. The barges fail to do anything vs the AV 13 of the vindi or predator. 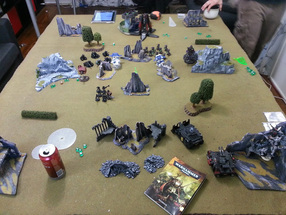 Movement
I pivot the predator, and adjust the vindicator to get a shot off at the deep striking immortals. The ironclad deep strikes to flame the immortals on the objective. 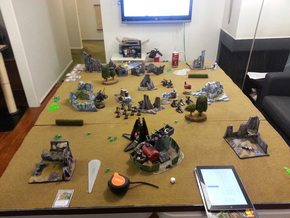 Shooting:
The vindicator nails the unit of immortals with the cryptek…I roll a bunch of 1’s when wounding.  The snipers fire as well, but I am unable to knock down the entire unit. About 50% of the immortals get back up.

The ironclad flames and knocks down a few immortals, which don’t get back up.

The predator penetrates and glances one of the  barges. He makes both jink saves. 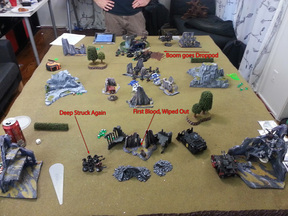 Movement
The immortals move forward towards to relic, holding back in terrain, as they are a bit wary of the vindicator. The flamed immortals move off their objective, so the ironclad can’t get an easy assault off.

The wraiths move up to deal with the ironclad as well. The veil immortals deep strike to wipe out the remaining crusader in the one group for first blood. 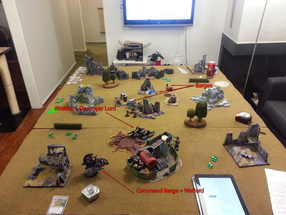 Shooting:
The cryptek immortals wipe out the remaining crusader. The barges are ineffective vs the av13 pred/vindicator. Now you know how av 13 feels!!! The command barge turbo boosts to threaten the ironclad. A few immortals take shots at the ironclad, fail to glance.


Assaults:
The wraiths and destroyer lord destroy the drop pod…which wounds 1 wraith, and knocks down a few immortals in the explosion! 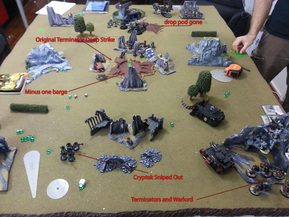 Reserves:
The terminators and inquisitor come in.

Movement:
I decide to weather the fire from the immortals which deep striked with line of sight to the predator/vindicator. The vindicator shifts up to get a good shot at the immortals @ the relic. The ironclad turns to charge the command barge.

I spend a long time deciding where to place the terminators and inquisitor. I decide I should try to threaten the relic and just go for it. I roll deep strike…and scatter to where they can’t be placed. MISHAP. I roll a 2, and he places them far into my deployment zone, unable to influence the game much. 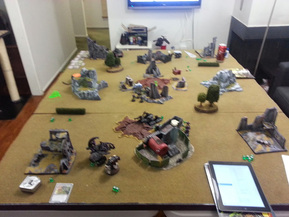 Shooting:
The dice turn in my favor. Predator explodes the center barge. Snipers kill the veil cryptek with a precision rending shot, and knock some more immortals down. Vindicator hits, kills some immortals, pens another barge which he jink saves. Terminators run to spread out. 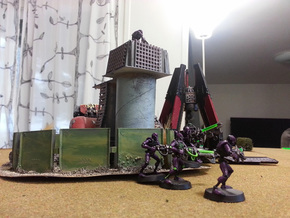 Assaults:
The ironclad slams into the command barge with a zeal only the Templars can muster. Attacks the lord directly, hits and wounds him 3 times. The lord makes 2 of 3 invuln saves. Str 10 vs T4. Will he get back up? 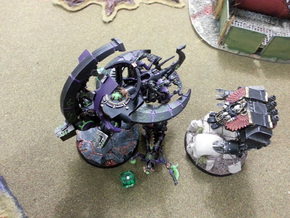 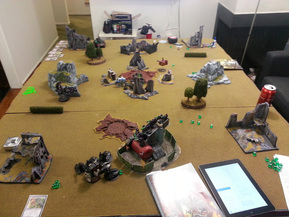 Movement:
The wraiths quickly move up to surround the ironclad, viciously angry at the warlords demise.
The immortals shift back onto the objective, and to shoot at the ironclad.

The cryptek less immortals move into terrain to get a cover vs the vindicator and snipers.
The immortals pick up the relic. 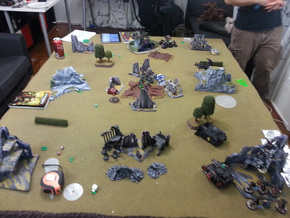 Shooting:
The predator starts taking glancing hits from gauss and barges.
The ironclad takes some gauss glances.
The command barge turbo boosts up into cover 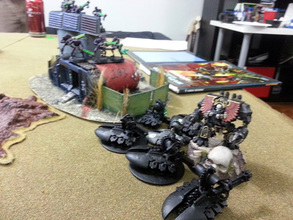 Assaults:
The wraith and destroyer lord hit the ironclad, making it initiative 1 due to fancy coils. The lord wiffs big time. The wraiths only get 1 glance. The ironclad explodes a wraith. Locked in combat! (1 hull point left) 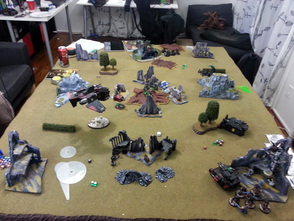 Reserves:
The storm raven comes in (with the master of forge and crusader squad)

Movement:
I decide to not move the predator again. Firing three lascannons a turn seems to help quite a bit. I move the vindicator around to get better shots off again. The terminators move up, and the inquisitor separates to drop his orbital bombardment. 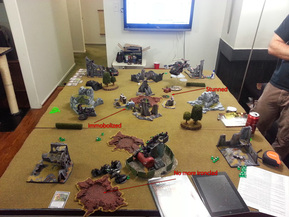 Shooting:
Inquisitor drops his orbital bombardment. Hits some immortals, and a barge which jink saves. (he’s made almost every jink save this game).

The stormraven unloads missiles, lascannons, and melta. Pens a barge, stunning it. Predator fires as well (another barge immobilized, and shields are down). Snipers knock off a few more immortals. (Snipers are doing awesome this game)

Assaults:
Lord hits the ironclad this time, and he explodes, putting a wound on a wraith. (nice job mr clad!). 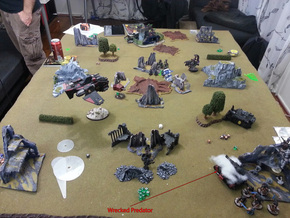 Relic immortals have the relic, start moving back with it.

Wraiths had consildated, start moving around their rear terrain to assist the immortals next turn.

Command barge moves for a shot at the zooming stormraven. 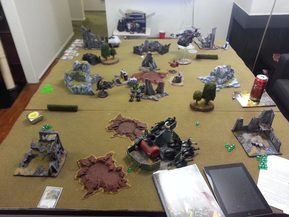 Shooting:
Vindicator makes a cover save vs a glance.

Predator gets glanced to death by the 3 remaining cryptek immortals.

Black Templar Turn 4
(Since a majority of the combat happened in the center in the next turn or so, the photos kinda of center into that section.  Outside of this not much happened.  Next time I'll try to be more consistent.) 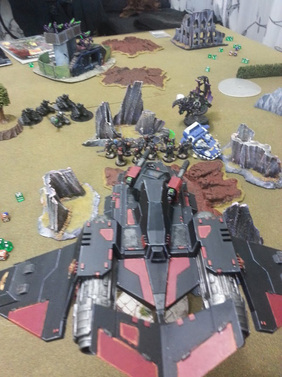 Stormraven swaps to hover mode, and deploys the BT crusaders.
Master of the forge separates from the unit.
Terminators move towards the remaining 3 immortals. Inquisitor separates.
Vindicator does his vindicator thing. 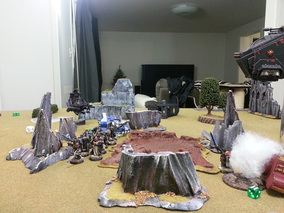 Shooting:
Crusaders decide not to shoot, since the assault range is going to be tight (need a 6 on a 3d6 difficult terrain roll). Master of the forge forgets he has guns. (That’s what I get for proxying!)

Inquisitor fires his psycannon and hits some immortals.
Vindicator kills the immortal holding the relic.
Snipers wipe out the remaining cryptek immortals.
Terminators run up now that the immortals are no more.

Assaults:
The master of the forge makes it in, wrecks a barge.
The Templar crusaders made the charge, and sweep the necrons in close combat.  (Yay chapter tactics!) 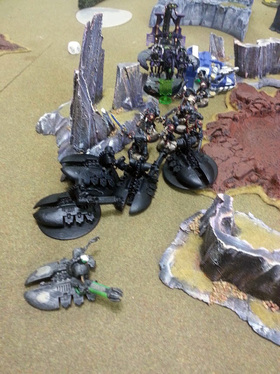 Movement:
Wraiths move up to assault the crusaders.

Shooting:
Command barge shoots the crusaders (think he killed one).

Either way, for epicness, we played that they roll 2d6, and they made the charge. I challenged the lord, and he mindshackled a crusader who killed one of his brothers. The sword brother was made init 1 by whip coils, so the lord swung first and killed him. Passed morale, so locked in combat.
Barge also hammer and wrath’d the unit, killing a crusader.

(Note:  Later we found out, that with the lord attached, they roll 3d6 for charging through difficult terrain and take away the highest dice.  Only the wraiths by themselves ignore difficult terrain when charging (though still become init 1, and would have gone at the same time as the sword brother) 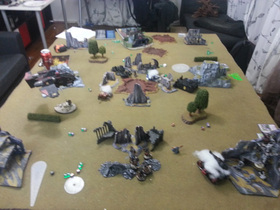 Movement:
Terminators moving up to help. (so sloooow).
Vindicator does something really stupid.
Master of the forge rembarks on the stormraven.
Inquisitor rejoins terminators. 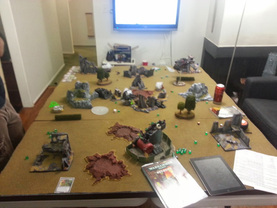 Shooting:
Stormraven wrecks the last annihilation barge. (Should have flown over and started shooting the immortals on the rear objective). Command barge is immune to fire, and jink saves.
Vindicator shoots at the command barge, scatters, wipes out 7 of the crusaders in close combat....Totally missed the barge. (rolled 12 for scatter)
Snipers have nothing to shoot at.

Assaults:
The crusaders are wiped out, I blame the vindicator.
We roll to continue the game.  It continues!

No photos, as no shots or assaults happened. 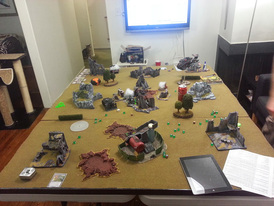 Movement:
I move the vindicator up to shoot his guys off the objective.
Terminators move up. 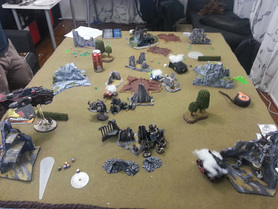 Shooting:
Vindicator is depressed at wiping out all his friends. Doesn’t do anything.

Stormraven, psycannon, and snipers do everything they can to hurt the command barge (since it can zoom, seems the most likely linebreaker target). He makes every single jink save.

(Note: Vehicles can not claim linebreaker, except in scouring/big guns never tire) 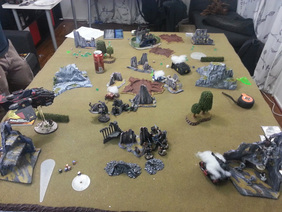 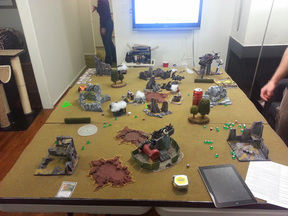 Shooting:
The immortals fire at the depressed vindicator…get 3 glances and wreck it.  Poor vindicator.

Movement:
Everything positions to unload at the wraiths.

Shooting:
Every unit I have shoots at the wraiths.

Stormraven attempts to knock out the barge.  Knocks a hull point off it. 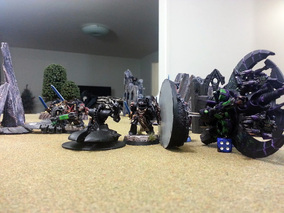 Assaults:
The terminators assault the wraiths and the barge. Wreck the command barge, Kill everything but a single wraith and the destroyer lord.  Wraiths are fearless and hold in combat.

We tally up the score.  The Necrons have first blood.  I have slay the warlord.  We both still hold our home objectives.  Neither hold the relic.  We do a careful check for linebreaker.... 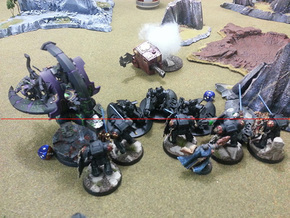 The wraiths did not back it completely into the Black Templar deployment zone, and thus do not get linebreaker.  The final score is....

After the battle:
Don’t fire a vindicator near your things.
Target priority is a must.  I should have fired more shots at the immortals on his home objective.

Destroyer lord should detach from wraiths in the future, so they get their 2d6 charge through difficult.

Changes for BT:
Thinking of dropping the melta gun in the main crusader squad (They’ll be jumping right into assault anyway).
Replacing unit of 6 crusaders with some scouts in a land speeder storm for objective grabbing (reserve)
Putting a heavy bolter instead of the missile launcher in with the scouts.
Assault cannon instead of las cannon on the storm raven.
Dropping the inquisitor for more goodies.