Proxy WARNING!:  This game uses proxies.  Some of the models in these armies weren't available originally, so conversions were done, or new replacements have not yet been purchased.  If this offends you, please skip this battle report.  I will point out which models represent their actual game equivalents.
Necrons
(1500 Points)

Necrons
Necrons held the night scythe in reserve, and deployed with a majority of the force in the center, with barges providing fire lanes.  In BAO #2, each opponent places three objectives, two of which must be outside of your deployment zone.  The reason there is so many objectives near the necrons is because the dark eldar player placed them extremely aggressively.

I noted the proxies in the photo, as well as objective locations. 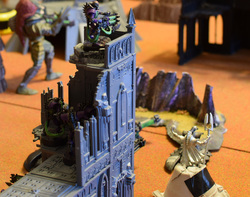 Dark Eldar
DE held the flyer, the archon's raider, and the pain engine are in reserve.  He placed objectives extremely aggressively, and deployed to keep most of his force in cover.  Combined with night shields on the vehicles, it should help reduce incoming necron firepower.   There was no attempt to seize. 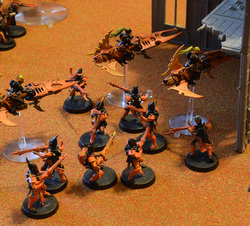 Movement:
Wraiths shift up to get some cover.  Barges move to fire lanes to try and get shots on dark eldar they can see.

Veil cryptek deep strikes with a unit of immortals to engage targets.  They scatter, and have to make a dangerous terrain check, which they pass.

Shooting:
Due to night shields, none of the barges are in range of the raider.

The immortals and cryptek fire, and wipe out the unit of jetbikes behind the terrain.  first blood! 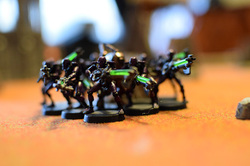 Movement:
One unit of warriors goes up into the building to stand on the objective and take pot shots at the immortals.
The rest response to the deep striking immortals, moving around to get maximum firepower on target.

Shooting:
The bikes caltrop the immortals, the raider, and two groups of warriors unload on them.
A few fall down, but then get back up and laugh in mechanical voices. 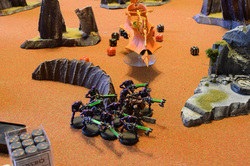 Movement:
Wraiths move aggressively forward.  Veil cryptek and his unit of immortals get the heck outta dodge, and move back defensively as to not be easily assaulted.  Barges move up to get into range of the raider.  Destroyer lord separates from the wraiths.  Backfield immortals shift around.

Shooting:
Once again, barges still out of range.  The 18" range from night shields is really hurting them.   I think some immortals take some ineffective pot shots at some warriors.  Command barge  turbo boosts up. 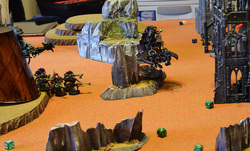 Assaults:
Wraiths attempt an assault, and don't make it.  Lose a wound to overwatch.

Reserves:  The flyer, and wyches/archon/raider come on.

Movement:
Wyches disembark from the raider to put pressure on the wraiths.
Warrior group shifts to the left, to get cover from the TL destructors
Flyer positions to shoot at the command barge.
Archon raider outflanks on the left side, directly behind one of the barges.

Shooting:
Wyches, and raider fire at the wraiths, killing one.
Flyer shoots at the command barge, pens and glances it.  1 hull point remaining.  Also puts a wound on a wraith from one of the missile blasts.
Warriors in the ruins shoot a dark lance into the other barge, glancing it.
Archon's raider pens the far barge, but he makes his jink saves.
Archon and his unit shoot the cryptek immortals, knocking a few down.
Bikes turbo boost and caltrop some of the immortals as well. 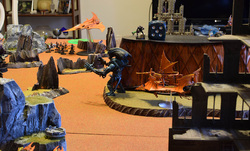 Reserves:  The Night Scythe and Immortals come in.

Movement:
Wraiths move up to engage the warrior group.
Destroyer lord jumps behind the raider.
Damaged command barge and annihilation barge back up.
Crytpek immortals shift back, as well as the annihilation barge to take on the archons raider.
Immortals disembark from the Scythe to obliterate the jet bikes.

Shooting:
The night scythe is out of range of the raider.  (night shields).
The disembarked immortals destroy the jet bikes.
The annihilation barge, cryptek immortals, and central immortals all fire at the raider...and do 2 hull points to it.
The other annihilation barge shoots at the dark eldar flyer, and destroys it.
The command barge fails to do anything of note. 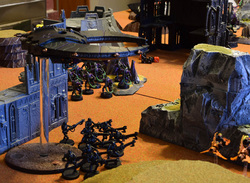 Assaults:
The destroyer lord blows up the empty raider.

The wraiths assault the warriors and lilith  and win, though lose 3 wounds in the process.  They fail to sweep the dark eldar unit, and they escape. 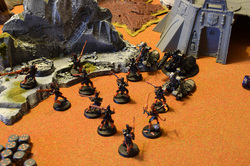 Movement:
The archon and his unit disembark from their damaged raider.
Lilith and her warriors regroup.The wyches move to engage the wraiths.The pain engine moves to get a shot on nearby targets.

Shooting:
The archon and his unit shoot the cryptek immortals.
The raider shoots it's dark lance at a barge, and explodes it.
The other dark lance shoots and is ineffective.
The pain engine and the wyches shoot the wraiths. 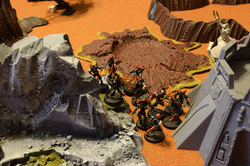 Assaults:
The wyches assault the wraiths and wipe them out.
The archon assaults the immortals, challenges the cryptek (who says no way), and then whiffs big time, and they are stuck in combat.

Movement:
Destroyer lord jumps back, staying away from the wyches.
Flyer turns and moves forward.
Command barge and Annihilation barge shift around.
One unit of immortals starts moving into the central building, rear group shifts back towards objective.

Shooting:
The flyer, annihilation barge, and command barge all shoot at the wyches who just wiped out the wraiths.  Many wyches die a horrible tesla death.

The immortals in the building wreck the last hull point off the raider.

Assaults:
Combat continues between the archon and cryptek group.  Immortals making huge amounts of saves and reanimation rolls, while the archon continues to miss repeatedly. 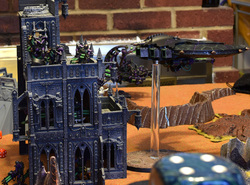 Movement:
Remaining eldar troops shift to get behind LOS blocking terrain.  Talos moves forward to try and get a melta shot off at something.

Shooting:
Talos tries to take out a barge.  No effect.
Dark lance strikes the one annihilation barge and immobilizes it. 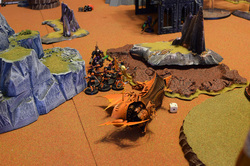 Assaults:
A few more immortals fall, but they are seriously tarpitting the archon's unit.

Movement:
Necron immortals ensure they are both sitting on objectives.
Command barge moves to support rear base actions.
Flyer flies off the board.
Destroyer lord heads back to support immortals.

Shooting:
Barge shoots and does a wound to the talos 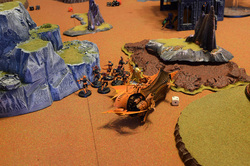 Assaults:
Archon and his unit clean up the immortals, and consolidate.

Movement:
Archon and wyches move back to get linebreaker and grab the rear objective.
Warriors on the ground start moving.
Remaining wyches (wraith killers), hide on objective.
Talos keeps moving forward, trying to get in melta range.

Shooting:
Warriors shoot at immortals on the building, knock one or two down.
Talos fails to do anything to the barge.
Archon and his unit are out of effective range of anything.

Movement:
Flyer comes back on and positions to shoot the Archon's unit.

Command barge and Destroyer lord head towards the dark eldar units in their backfield.

Shooting:
Flyer shoots and wipes out all the remaining wyches in the archon's unit.  Denying him the ability to hold the objective.

Immortals/Barge shoot the talos some more, put another wound on him.

Shooting:
Some immortals get pot shooted to no real effect.

Assaults:
The talos charges in and angrily destroys the barge.