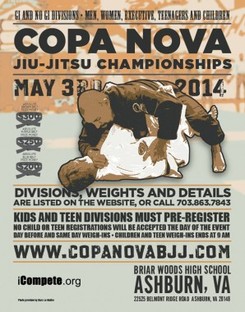 Copa Nova BJJ Tournament 5/3/2014:
The third tournament of my Brazilian Jiu Jitsu career. The best and most frustrating performances of my competition career. 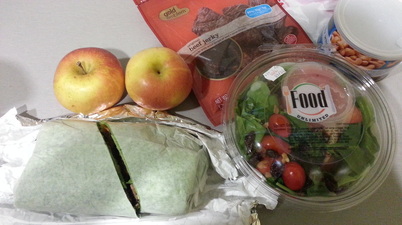 Greetings everyone! I was absent from posting the other week because I was undergoing the last bit of preparation for a local Jiu Jitsu tournament. I had competed at Copa Nova once before but this would be my third tournament overall. With a bit more experience under my belt, I was going into this one with a much different mindset. I was no longer going just to hopefully not make too many mistakes and come out on top. In my head, I was going to impose my will and dictate how the matches went. While I am still in the white-belt and beginner (for no gi) categories and my technique has a very long way to go, my mind has started to react/recognize situations better while remaining calm throughout.

Before I get to the matches I will comment on the prep I went through. Just like any competition sport, you always hope to "peak" at the right time. This is a combination of making/losing weight appropriately, coordinating the different aspects of your training, being mentally prepared with a game plan and (perhaps the most overlooked one) being properly rested. The divisions for the tournament go by age, skill and weight. Most people try to be at the top of their weight class as to have a bit more mass to use against those towards the bottom of the division. My two divisions were: No Gi, masters (30+ yrs old), beginner, cruiser weight (180-199.9lbs) and White Belt, masters, cruiser weight. 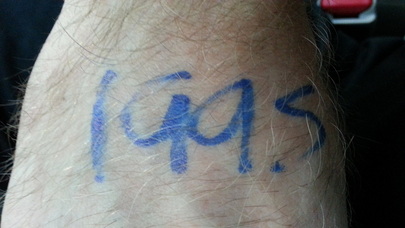 Depending on the organization, some will let you do a night before weigh-in while some have you weigh in right before you step on the mat. Copa Nova is of the first variety. I always have a pretty good handle on my weight (I usually hover just below 205) since I follow Intermittent Fasting eating schedule. I will probably go into more detail at a later time but it basically means I go for 15-16hr (sleep included) without eating and then have a 8-9hr window to get my food in. For me that means my first bit of food comes at around 3-4pm everyday. Whenever I need to make weight I just make sure to tighten up my eating window and clean up my diet 100%. This usually takes care of the initial few lbs. I opted for the night before weigh in (Friday night) so I could feast afterwards and have plenty of energy for the competition. On Thursday, I ate my last meal around 2-3pm and had nothing else until after the weigh in. On Friday, I limited my water intake to around 8oz. just to be safe. As you can see I came in at a perfect 199.5 (199.9 max). If I had missed weight, I would have had to be with everyone over 200lbs (no upper limit).

Coordinating my exercise in order to peak at the right time was a simple task for me (since its what I do for others as job). Four weeks out from the tournament, I started to cut back my weight training (normally twice a week) and completely cut it out two weeks before. I replaced these days with more days of cardio and jiu jitsu training. I always plan to do nothing but stretch and rest for the two days before a tournament but this was the first time that I rolled/sparred for eight of ten days prior. I was definitely tired at the end of that stretch, but after my two days of rest I felt great. I will try to replicate this in the future. 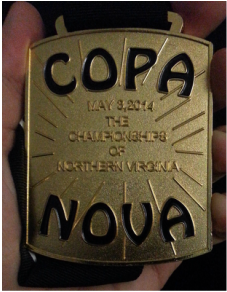 Now onto the matches (videos below). All tournaments have random aspect to them - time. Since you never know how many people are going to show up or if they will go for the entire time limit, you have to be ready and relaxed at the same time. This is something that just comes with experience but can really throw you for a loop. The timing was perfect for my no gi matches - my first one was about an hour after I walked in the door.

I had a great outing in my no gi division and took home the gold. I was a lot happier with the physical size of my competition at this tournament too. Last time I was much bigger than my opponents, making it easier for me to just fall back on my strength advantage. I felt more evenly matched this time around and had to utilize my technique to a greater extent because of it.  The white guy was my first match - I finished him with a north-south choke just before time ran out (5min match). The black guy was my second  no gi match (finals). He was very strong but tapped out to what my coach called an "atomic level" shoulder missile (shoulder in the throat). He wound up vomiting because of it (just water).

I only had one match with the gi on and I lost by one advantage point. I had a 1 - 2 hr wait between matches so I'm sure my head was out of it a bit. I felt that the guy stalled while in my half guard and the ref didn't do anything about it (they are supposed to). The first half of the video is missing but he was just holding on the whole time anyway. I was waiting for him to do something so I could react and it just never happened. If i pushed the issue sooner (as seen in the video) I could have come away with some points and won - I ran out of time (4min match). That being said, there is no one to blame but myself.
I hope you enjoyed my videos and perhaps gained some interest in the martial art/sport as well. It is something that I plan on participating in for years to come and I encourage everyone to try out a class.
Comment
To the Top