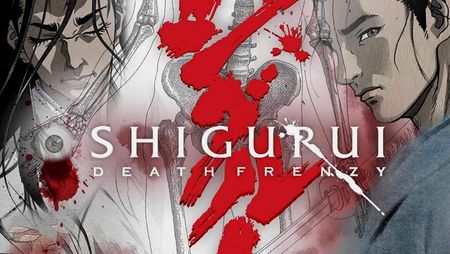 Detestable Beauty:
When we are faced with something horrible or shocking, quite often we are fixated upon it. Perhaps our minds are trying to process what at first glance we cannot comprehend. Perhaps we are drawn to the exoticism of such horror. 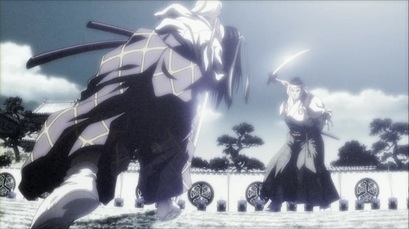 Shigurui is a series that embraces the above statement fully. While the animation and craftsmanship are top notch, you cannot escape the grotesque brutality that is housed within.

Death Frenzy  is a twice removed interpretation of the first chapter of the historical fiction novel Suruga-jo Gozen Jiai by Nario Nanjo (1908 - 2004). (*Note: I spent a long time looking and could not find a publishing date for the novel.) From this novel, a manga was written (completed with 15 volumes) and then this anime based upon the manga was created. The manga finished up in 2010, while the anime (which covers the first six and a half volumes) aired in 2007. After watching the first two episodes when they originally aired on the Funimation website, this series had eluded me. It was only a month ago that I was finally able to sit down and witness this spectacle in its entirety. 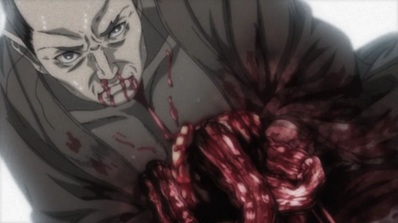 Shigurui takes place in Shizuoka Japan during the early 1600's, during Tokugawa Tadanaga's rule. Quite often this time period (all over the world) is romanticized with heroic tales, love stories and honor or purity prevailing unscathed. This is not the case in Death Frenzy. The world is portrayed as it truly was - dark, brutal, straightforward and unforgiving.

Our story opens up with the daimyo calling for a tournament to determine the greatest warrior in the land. The twisted ruler declares that these battles will be fought with steel and not bokken (practice swords), guaranteeing death or crippling injuries for the participants. Recognizing the madness of this ruling, one of his vassals commits seppuku in hope that his sacrifice will appease the ruler's blood-lust - such is not the case. As the tournament commences, we are introduced to two battle scarred samurai. One man is blind while the other is missing his left arm. These are the main characters of Shigurui - Irako Seigen and Fujiki Gennosuke. 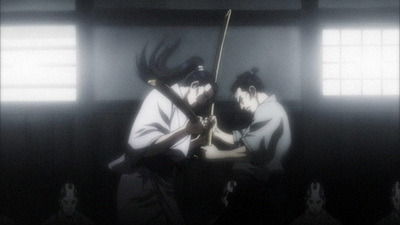 Before any blades are swung the anime travels back in time to reveal that this is not their first meeting. Fujiki is a top student of the Kogan style. The style is revered for its effectiveness as well as its demented master. Kogan Iwamota, while still ruling over the school, spends most of the year in a stupor like state of madness, only to regaining complete mental clarity for a small time each year.

Along with his skill level, Fujiki is extremely loyal, positioning him as the favorite to carry on the Kogan bloodline and eventually become grandmaster himself. These plans are interrupted when a stranger, Irako shows up to test his skill against the Kogan school. This is where rotten seeds are sown and roots entangle, binding their once separate fates together. What follows is an intense story of deception, love, hate and revenge. 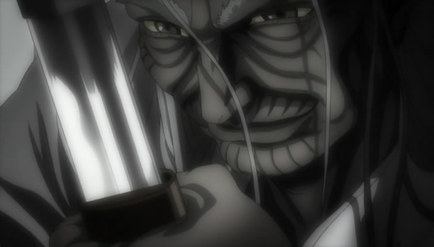 As can be seen by these images, the art in this series is of a very high level. While slightly stylized, there is a very realistic feel to the animation. Most other elements are an exercise in simplicity - in a good way. The color scheme is usually an array of washed out colors, causing the bright crimson of blood to create even more of an impact. The contrast makes for some truly stunning scenes. The environment is also done in this fashion. There are very few long and sprawling shots, keeping the attention on the characters and their actions.

The dialogue is sparse as well. There is no random banter that can be found in most anime. While this might sound off-putting, just like the art style, it tends to punctuate what is being said. Through this the viewer is really drawn in when the characters are talking which is very important. Death Frenzy is definitely a series that requires you to pay attention to while watching. Because of these elements, some people have labeled this series as slow - I disagree. For me, the pauses in action became almost as intense as the extremely precise sword fights. When blood was not being shed, the intensity just seemed to pile up until the pressure was released again - often from someone's severed body. 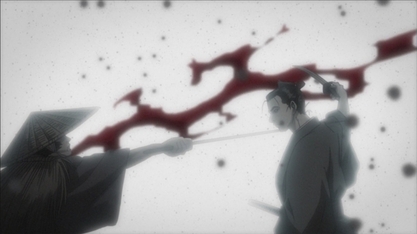 Even with all of this praise, due to the subject matter, this anime is not for everyone. Besides all of the brutally graphic combat, as mentioned earlier, the story takes place in the 1600's. This was a time when women were used as bargaining tokens - vessels in which to carry a heir.

With this in mind, Shigurui does contain sexual scenes (some of which are abusive). While not everything is shown in detail, the implied can be very disturbing by today's standards.  That being said, these scenes are scattered throughout the series and not just thrown in for the sake of shock value. 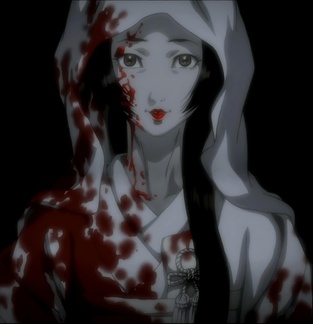 If I had any major complaints it would be that, like a lot of anime, this series does cut off abruptly at the end of the twelfth episode. Where it stopped was a bit surprising for me (I didn't know that it only covered 6.5/15 volumes) but the ending does serve as a very strong impetus to seek out the rest of the series via manga (which I plan to do). *Edit/Afterthought: This complaint can be quelled a bit by the fact that you do learn the entire back story of Fujiki and Irako. If you go into the series with the mindset that that is the story they are telling, then the ending isn't as jarring.

With everything considered, I highly recommend Death Frenzy. Obviously, it is a very adult series with difficult content at times, but the sum of the whole is greater than parts contained within. *Edit/Afterthought: One of the parts that adds great value is the fact that the events are pretty believable. Obviously, there is a bit of embellishment, but all of the techniques come across as plausible.  There are no magic powers or abilities to be found here, just supremely refined technique. That was something that definitely kept me hooked throughout the series. A final word of advise: I don't recommend trying to marathon all twelve episodes - you will feel emotionally drained after watching a few of these in a row.

Let me know what you think in the comments and check out the trailer below! (*Note: for some reason the official trailer is only 360p.)
Comment
To the Top