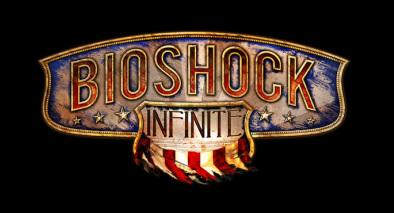 With all of the praise that this game has received, I pull back the curtain and reveal its blemishes for all to see.

*UPDATE: Check out my final verdict of the game in my BioShock: Infinte...Saved! blog post.
When the first bits of info and teaser images of this game hit the interwebs, it spread like wildfire - and rightfully so. This game was going to be the true successor of the BioShock series made by Kevin Levine and Irrational Games - a team that brought us such an astounding game the first time around. With the first BioShock being one of my favorite games (I played it many times over and I rarely play FPS's more than once), I was VERY excited for this release. 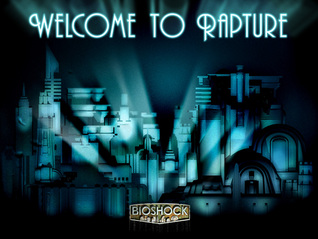 The original BioShock introduced us to a truly haunting world. This was a world in which science had replaced religion, genetic augmentation was a mutating addiction and where you felt the crushing pressure of the depths always upon you. While the gameplay and controls were pretty standard for a FPS, it was the story and the environment that truly set this game apart from the pack. You know that a game has done its job when it alters your style of play. I remember going from a stealthy tactical approach to a, "blast a mannequin anytime you see one," approach...you know what I'm talking about. 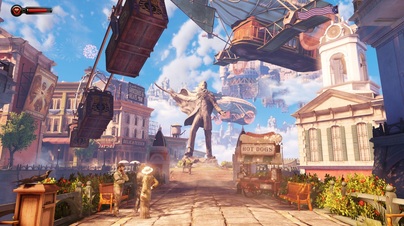 Along with the first images that were released, when the first video hit, we saw that Infinite had the polar opposite setting: a fantastical floating city, full of airships and rail lines. The game came across as flashy and enticing, offering something new and beckoning us to explore this "open" world. Even though this game a huge amount of hype around it, for one reason or another, I didn't wind up getting Infinite until this past Winter Steam Sale. On top of that, I didn't wind up actually playing the game until these past few weeks. I figured that this would play to my advantage. While the game had won many awards and received a high score on Metacritic, the buzz had died down and I felt that I could experience the game without any pressure of ridiculously built up expectations. 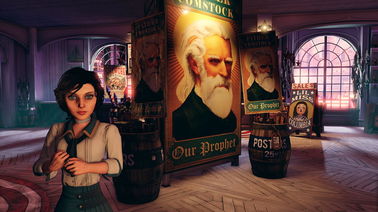 Right now, I am about 75% of the way through the game (on my PC) and I will say that the story(telling) of BioShock Infinite is truly wonderful and at the top of the heap as far as games go these days. Just like how the environment is a polar opposite of the first BioShock, so is the cultural norm - instead of science, this world is driven by hardcore religion. Both games share the theme of elitism and class separation. BioShock Infinite takes it to the next level though with heavy examples of racism. The game in no way promotes it, but very vividly displays the hideousness of it. Side note: it is interesting how there wasn't really much controversy about the racism, there was controversy over the fact that (Spoiler - highlight to read: you have to be baptized to enter the city initially). ﻿﻿ 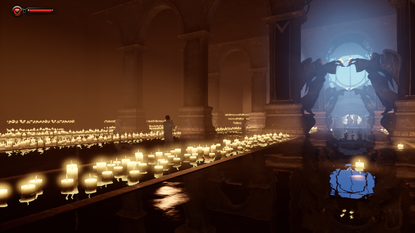 Another high mark for this game is the graphics. As you can see by the screenshots, the game can be absolutely stunning. While very slightly stylized, there are many times during this game where you will just want to stop the action and take it all in. They really took their time to add all of the little details for this game and the proof is in the pudding.

With the good marks so far, you may be asking, "what is so frustrating about this game?"
Something that is becoming more prevalent with games these days is the obvious, "console to PC port." Infinite just screams this at times and really pulls me out of the game when it happens. The first thing that I noticed is that there is no quick save feature, only save check points. I know that many people see this as a way to add to the difficulty of a game, but I see this as a ridiculous notion. As an adult, sometimes I need to stop playing a game "right now" for one reason or another. I should not be penalized for this and lose the progression that I have made because of this. On the topic of saves, guess what? You can only have ONE... For a PC game not to have multiple save slots is the equivalent of not using all of the gears in your car. The machine is perfectly capable of it and it would only enrich the experience. 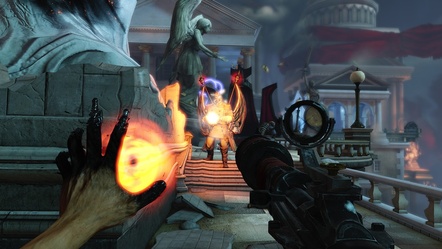 The next and possibly biggest detractor of the game for me happens mostly during combat. (Note: the combat, while fun most of the time, doesn't quite "click" 100%. Great Kotaku article about this.) I grew up during the Quake I/II, Unreal Tournament, Half-Life, Counter Strike and Team Fortress era of online gaming. If you wanted to be anything other than target practice for everyone else, you submitted to the belief system of (as my friend put it) ALL HAIL THE STRAFE CIRCLE! Before entering any game you would remap left (A) and right (D) to strafe and bump up the mouse sensitivity to take care of turning with ease. After countless years of ingraining this basic movement pattern of success, Infinite goes and screws the pooch on it.

You can NOT straight up strafe run...let that sink in. In in order to strafe run, you must first run forward and then strafe. So don't even think about strafe running from cover to cover, popping off shots along the way and not getting hit yourself. I hear that while using a controller/on the console this is not as noticeable, but you still cannot strafe run.

The run mechanic is a bit screwy too - you press and release shift to turn on run instead of holding it down. This becomes very awkward at times and your run also gets turned off if you run into a box/get clipped on some cover. These two movement issues have accounted for just about all of my deaths while playing on the Hard difficulty setting. 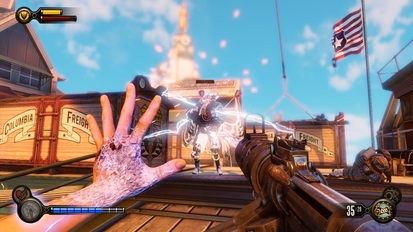 The last console port issue is not as big as the previously mentioned ones, but is still an annoyance during gameplay. In the bottom left-hand corner you can see the two vigors displayed that you can quick-switch between. The quick-switch function is seen in most console games (since you can't select via the numbers on the top of a keyboard), but it often doesn't mesh 100% on the PC. With your guns, you can only have two selected at a time so cycling between them is fine - they are in locked slots. The vigor quick change slots are dynamic and can be changed via the number bar. Here in lies the problem. If you reactively hit a number key for a vigor that is already in the #2 quick change slot, it acts as if you actually hit the quick change button, causing the two selections systems to butt heads with each other. While this may not sound like a big deal, it does become bothersome when trying to cycle through your vigors. Also, just from a regular gameplay standpoint, I wish you could somehow cycle through your vigors like you could your guns (mouse wheel).

I Will see how things go for the rest of the game, but I doubt that my opinions will change on these topics. It is unfortunate that these issues are present. If they weren't, I would agree with a rating in the 90's, but (for me at least) these issues detract enough from this combat heavy game to drop the score significantly.

If I had to recommend a top game from the past year and a half, I would choose Dishonored (metacritic) over BioShock Infinite, hands down.

Let me know what you think - leave a comment!
To The Top