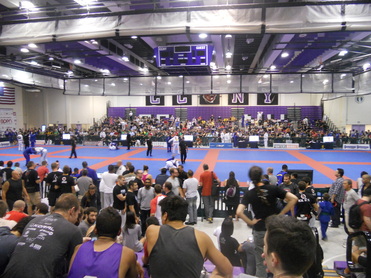 IBJJF Summer New York Open 2014
My first time at a Federation tournament and the first time my body truly failed me. 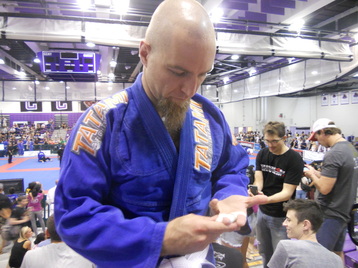 Originally, I hadn't given much thought to this tournament. It was out of state and it didn't seem like many of my classmates were paying much heed to it either. That all changed when my coach asked me if I had looked into it yet. It was a little over a month away and usually when coach asks if you have "looked into" something yet, it means "you should sign up". With this being the case, I figured why not.

For every tournament I have cut between five and ten pounds over a month or two - nothing crazy. Each time I cut, I wind up keeping a lower weight when I gain some of it back. This time around I needed to cut around six pounds. I had to be extra careful for two reasons: 1) In the IBJJF you weigh in literally minutes before your first match and 2) you weigh in with everything on. The top weight limit was 208lbs and my gear weighs about six pounds total, so my goal was around 200 without anything on. In the IBJJF if you don't make weight you are disqualified with no refund ($95-$110 entry fee).

Leading up to the tournament, training went great. I came off of my weight training cycle feeling strong, wasn't carrying around a ton of nagging injuries and my cardio felt top notch. I made sure to always stay after class for extra rounds and I never took any breaks. I was consistently giving the higher belts in my class trouble and it was very rare for me to get tapped. I was ready. I was confident. 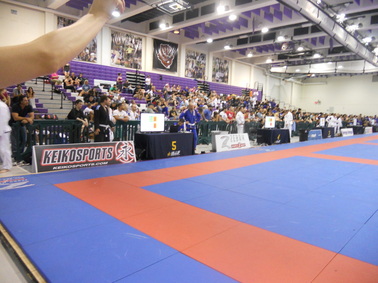 Well...a lot can change in a day or two. The day of the event, before driving up, I weighed myself without anything on - 198.6. I was only a pound and half under my goal so I figured that it wasn't a big deal. I still felt pretty good overall. During the drive to the event we didn't run into any traffic but I did run into my over-active brain.

I have a very analytical mind and it gets me into trouble from time to time. I can't remember what exactly I was thinking about (something pertaining to the tournament), but all of a sudden my heart was beating through my chest and all of my senses were on high alert. Great. Exactly what I don't need - an adrenaline dump before I even get to the venue.

Upon arrival, I met another obstacle - apparently the air conditioning in the gym was having issues. It was hotter inside than out. As I made my way up the bleachers to where my coach was, I noticed that my t-shirt was already starting to cling to me from sweat. I know that no one performs well in the heat, but I seem to get hit by it a little harder than some. I immediately tossed my gear on and did a pre-weigh - 200.... You've got to be kidding me. I think their scales were off because there is no way that I lost three to four pounds just driving. I slammed down some Gatorade and two granola bars to get some energy in me (I hadn't eaten yet and my first match was at 5:15pm). I was able to put on just over two pounds - any more fluid and it would have been sloshing in my stomach. At the same time, my nerves were completely gone and I felt no pressure at all - at least I had that going for me.

With about 45 minutes to go, I started my warmups. Oh crap. Why are my shoulders burning just from doing arm circles and why did I feel a little light headed when I stood up quickly? Unfortunately, these were portents of things to come. I finished my warmups and then went back to the bleachers, waiting for my name to be called. Shortly after, it was and I had my first match.
My first fight went great. I dominated my opponent with a score of 15-4 and I was able to finish him with a rear naked choke before time ran out. That being said, as soon as I stood up I felt the fatigue wash over me. Even re-tying my belt took more effort than was necessary. I was completely gassed. As soon as I got off of the mat I started chugging fluids and trying to calm my breathing down. In an IBJJF tournament, you are supposed to be given at least the length of a round (five minutes in my case) to rest before you fight again. My coach told me that it was questionable if I received all of my rest time. The match after mine only went about two minutes and I was called onto the mat immediately after for my next fight. 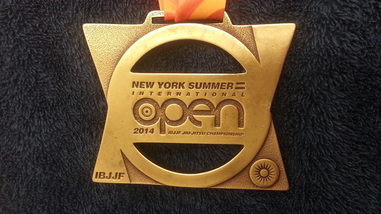 I had never been this tired before. It was unreal. All I could do was continue to push forward and try my best not to fall into a submission. I give credit to my opponent for applying good pressure most of the time and making me carry his weight. He did his job and won 4-0. That being said, this was also his first match.

I pulled the short straw in the division (there was an odd number of people) and had a potential of three fights while everyone else (minus my first opponent) only had two. In the end I wound up with a bronze medal and a record of 1-1 (the same as the guy that got silver). In all honesty, none of these guys had more skill than me and I would have swept the division if my body didn't give out.

Looking back on the footage, its always easy to say I should have tried harder and its easy to get bitter. The more time passes, though, the harder it is to remember how weak I was out on the mat. I know that I left it all out there but I still didn't accomplish my goal of gold. That being said, my coach did commend my efforts and said that I, "fought like a warrior." He also made the point that tons of people compete at Federation tournaments and never get a medal.

At the end of the day, glory is fleeting anyway. If I had won gold, the aftermath would have been the same - back to the grind. I can't wait to test myself against a new set of opponents at the next tournament!
Comment
To the Top