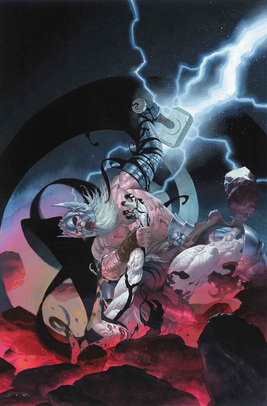 Thor: God of Thunder's Glorious Reign:
With the series soon to hit the quarter centennial mark and still kicking ass, its safe to say that Marvel scored a full mead horn with this reboot. 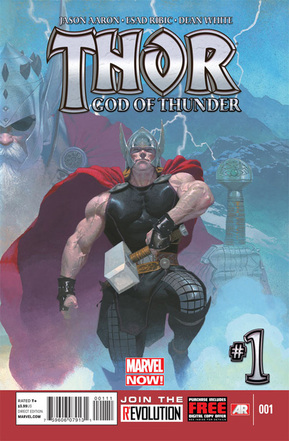 Before this reboot, I never picked up a Thor comic in my life. His character always came across as super corny and honorable to a fault. My interest in Norse mythology stemmed more from Viking Metal bands like Amon Amarth and Enslaved rather than any print source.  Over the years, through many avenues, Marvel did a great job of encouraging me to open my wallet, though. The first Thor movie came out in 2011 and while it did look visually appealing and received positive reviews for the most part, I never actually got around to seeing it in the theater. Thor was next sighted in The Avengers movie (summer 2012). I did see this movie and was witness to the thunder god's potency. It provided enough impetus for me to do some research on the blonde behemoth.

Even for being a god, his feats were more than impressive. Depending on the iteration, his various abilities ranged from time travel, the power to place a protective shield around an entire galaxy and the small matter of Willing Himself Back To Life! What can I say, I was hooked with the promise of pages filled with spectacular awesomeness. That, compiled with the artwork accompanying the announcement of a reboot in November 2012, sealed the deal. I was subscribed. 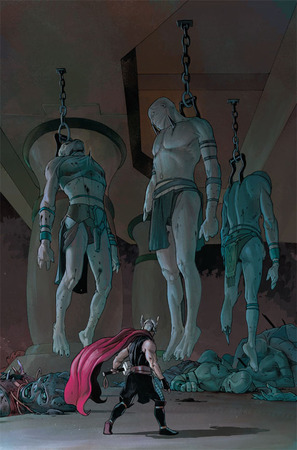 They say don't judge a book by its cover, but when the cover is done by the same artist as the pages inside, I think an exception can be made. Marvel scored big when they placed veteran artist Esad Ribic (homepage, tumbler) on this project. He is truly the best man for the job. Every page is artwork worthy of being framed and reeks of epicness. If I had to describe his style, I would say that it comes across as a mix of Brom and Boris Vallejo, but more than stands on it's own merit.

One thing that really stands out with Esad's work is the tremendous atmosphere that it conveys. Its one thing to draw accurately and have good mechanics, its another thing to consistently set the stage like this. The story arcs in the first half of the series are very grim and the artwork sets the tone perfectly throughout. With all of that being said, Ribic has done most but not all of the issues (#1-#5, #7-#11, #19-#24). The other contributing artists carry the torch well enough, but Esad's work is tough to compete against.

The other side of the coin has remained consistent for 100% of the reboot. Writer Jason Aaron has been at the helm since the start and I hope it stays that way. Instead of going through a re-introductory period, the reader was thrown right into the conflict. 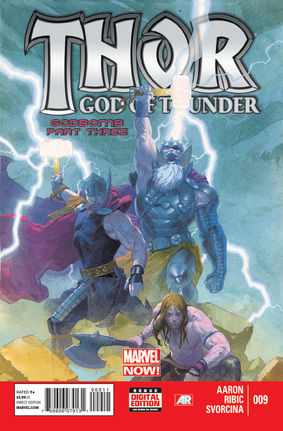 The story that launched this reboot was one of such consequence that it could have been a series ending story arc. While starting with a bang is great, its easy for a writer to get lost in his own wake, the following stories not being able to break the crest created. One of the ways that Aaron avoided this was through his triple timeline story telling. In this case, three Thors are better than one. We are treated to tales about young (pre-Mjolnir) Thor, present day (Avengers) Thor and old Thor who has become the All-Father.  This has been a fantastic way to flesh out the character's backstory without it seeming like a flashback. Everything is presented as a real-time event, keeping the content fresh.

Without giving away any spoilers, a theme that runs throughout all of the timelines is that being a god is an immense burden. While young Thor has his fare share of feasts, women and mead he is still sobered into reality with this fact. This is not merely the generic "hero's responsibility" but the fact that anyone that prays to him and the people of earth are his people in every sense of the word.

Now don't read into this too far. These storylines are still filled with Thor doing what a Viking god does best - Epic Battles!  None of the villains that he faces are slouches and he is constantly being pushed further. This is not an invulnerable Thor by any means either- he gets battered, bleeds and defeated (temporarily at least) in these clashes. These battles are so epic that old Thor had to resort to an accursed weapon in his recent battle with Galatctus. 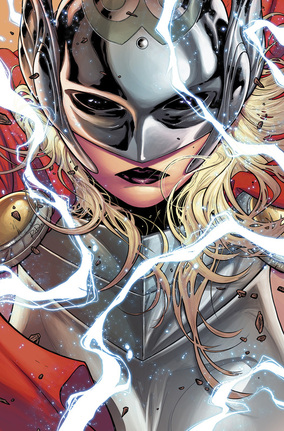 Now with all of this ringing endorsement, you'd think that I would have no reservations about the series. That would have been true until the recent announcement of a "female Thor". Don't get me wrong. I have no problem with women being in strong or lead roles. The concerns that I have are how are they planning to keep the continuity of the series (dealing with the three timelines) and by what means does Thor become unworthy of Mjolnir so that someone else must step in. Along with the story shift comes another artist - Russell Dauterman. Even though he doesn't have a similar style to Ribic, I much prefer his work to the previous artists on the project.

October is the posted release date for the first female Thor issue, so That leaves a possible two or three issues for Jason Aaron to set things up. They did just end a story arc so we will see where this goes. He hasn't let me down so far and will hopefully keep the trend going.