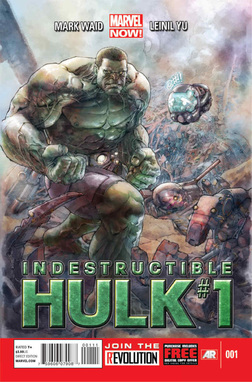 The Indestructible Hulk, Destroyed!
The big green behemoth was at the forefront of Marvel's company-wide reboot. A great flame was lit at the start, but perhaps it burned too brightly. 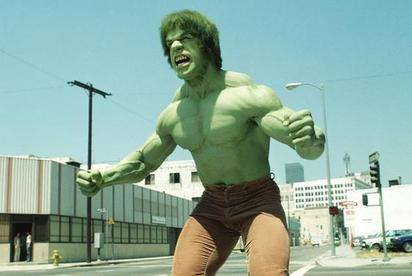 I started collecting comic books during elementary school. This continued on into high school, before taking a hiatus that spanned from my senior year (2001) until this past year (2013/2014). In the beginning, I followed the Marvel cannon of Wolverine and the X-Men, only picking up a random one or two Incredible Hulk comics along the way. After that I branched out into more extreme/adult (for the time) comics such as Spawn and random graphic novels. Even with my limited comic book exposure, the Hulk was still one of my favorite all time characters. I remember being glued to the screen as a child, watching Lou Ferrigno bust through walls and flip over cars. Even back then, I think that I could perceive the hardship and sadness that was Bruce Banner's life - with that piano music at the end of each episode it was hard not too!

That later transformed into me watching the various Hulk animated series that ran on Saturday mornings or before school during the week. Even without much paper, this TV material still fueled the green rage inside of me. The Hulk was then featured in two solo films and of course the smash hit that was The Avengers - a movie that many felt finally did the Hulk justice. All of this time, I was missing out on the comic book action that was continuing to churn out "behind the scenes". When I heard that Marvel was going to do a massive company-wide reboot, I was beyond excited. With Indestructible Hulk #1 (and Thor #1 as well) looming on the horizon, I figured that the timing was right for me to finally get back into comic book collecting. 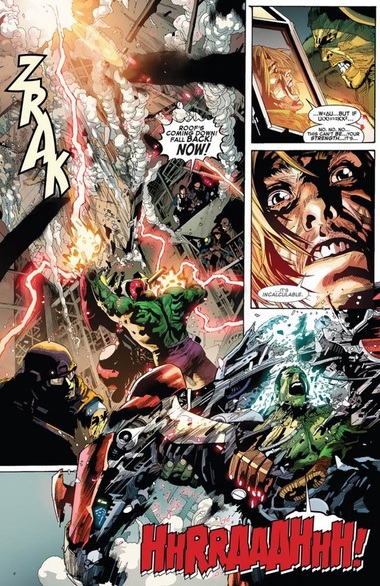 WARNING: From here on out I will be speaking very loosely, so expect major spoilers throughout.

In all honesty, the reboot of the Hulk went great...initially. We were treated to the awesome artwork of Lenil Yu (Tumbler, Deviant Art) and a great angle for stories to explode from. To sum it all up, Bruce Banner decided that it was time to stop running and time to act like the unstoppable force that he is....mentally. Being one of the most intelligent minds on the planet, Banner outsources the Hulk to S.H.I.E.L.D in exchange for a top of the line technology and a lab to create masterwork inventions.  They get a deployable force of nature, he gets to basically repent and do good for humanity. "Hulk Destroys, Banner Builds."

It was a surprising twist to follow but one that was very intriguing and seemed like it had a ton of potential. Another very nice touch (and correct me if I'm wrong) was that Banner's dialogue sounded like it was coming from someone with a massive brain for once, not just a regular person. The words used, the sentence structure and the pacing all made you want to re-read the text just to make sure that you didn't miss anything.

The first five issues were top notch entertainment with the Hulk doing what he does best and Banner inventing things along the lines of water purifiers that would destroy all diseases in third world countries (If I remember correctly). During this time, Banner also got to recruit assistants for his time spent in the S.H.I.E.L.D. lab. All of them are extremely smart with "something to hide." Ok....not the best plot device but Hulk is still smashing so I'll let it slide. 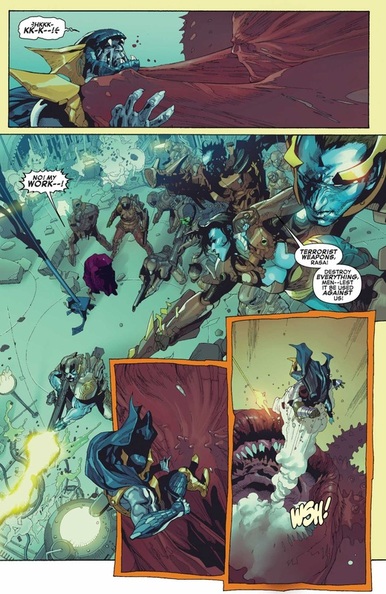 The Hulk's best adventure, in my opinion happened in issues #4 and #5. The underwater dwelling Atlantean warlord, Attuma is running amok in the Pacific Ocean with his sea monsters of mythical proportion. S.H.E.I.L.D. goes to investigate and of course bring along the big green guy. Awesome. Underwater battles, a "submarine carrier," ridiculous magical kraken-esque monsters - whats not to like? One of my favorite pages is definitely the one featured here.

The Hulk is swallowed by one of these creatures that has the magical feature of being impenetrable. So instead of tearing through it to attack Attuma, he merely strangles him through it. Freakin' awesome. Prior to this, Banner uses his smarts to figure out Attuma's plan. Through alchemy, he planned to turn the top mile of the ocean into foaming acid, striking a massive blow against the "air gulpers."

After this issue, red flags started to pop up and the series as a whole really took a downward spin for me. The first problem was Marvel reassigning Yu to another project that they wouldn't talk about. Since I've been out of the comic book loop for a bit, I'm not sure if this is common place now, but this struck me as very odd. I know that artists leave or are replaced after a certain number of issues but five seemed ridiculous.  Perhaps it wouldn't have been so bad if the artist they brought on board had a comparable style, but it was a polar opposite. 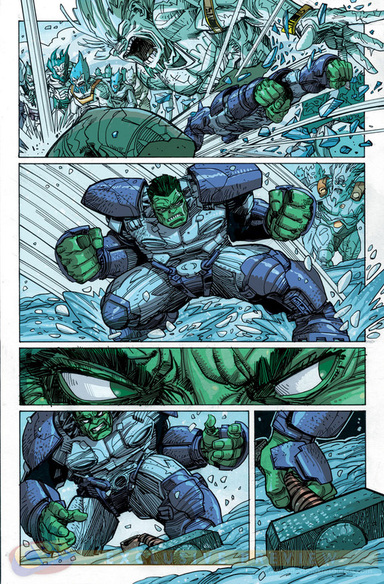 Walter Simonson was brought in to replace Yu. The name didn't ring a bell, but apparently he is a legend in the industry. Legend or not, transitioning to his art style was extremely distracting. Simonson's work is very simple and has a ton of lines in it...not really sure how else to put it. It looks like a practice sketch compared to Yu's HD images. Some people can't get enough of the older style, but if I wanted it I would read the Sunday comics page in the newspaper.

In this arc, Banner and his team are teleported to the realm of the frost giants while experimenting with some uru metal. Super campy Thor shows up and they smash some faces. During their stay in Jotunheim, one of Banner's assistants reveals her dark secret. She has a supposedly incurable disease and was hoping to commit suicide by being collateral damage during one of her boss's Hulk outs. Really?

After this arc was over they changed artists again and more disappointing assistant back story was revealed. Whenever this happened it just seemed like filler and shook the focus of the comic too much. Soon after, they started a major arc involving time anarchists attempting to erase banner from ever being born, effectively erasing the Hulk. Greggles and I both agreed on this one - time travel is a very poor plot device.

The next arc involved an evil plot to turn people into Inhumans through terrigen bombs. Honestly, for some reason, I felt that I was just going through the motions with these later issues. I was reading them just because I paid for them (hence the lack of description above). There were a lot of instances where I felt that sections should have come across as really cool or exciting, but I just couldn't get behind the comic anymore. There were just too many falters along the way. 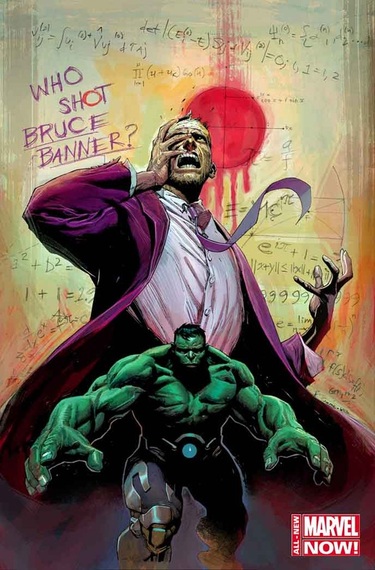 The next issue I received in the mail sent me for a loop. I wasn't sure if other people were voicing their disappointment toward the series as well or if this was just how Marvel was running things now, but apparently after doing only 20 issues, another relaunch is just fine. WTF? Really? I looked around on the net and found some interviews from five months ago stating that this was all planned. If that wasn't enough, the plot was the icing on the cake.

An enemy agent snuck into Banner's lab, undercover as a S.H.I.E.L.D. agent and double tapped him in the back of the head without being noticed. Yup. That simple. No immediate Hulk rage, just Banner requiring emergency brain surgery to survive. If it was that simple to take Banner down he could have been killed a millions times before. Something as simple as a car accident could have done him in. Even though I was pretty upset about the way things were going, I held onto a shred of hope that the next issue would set things right.

Nope. The enemy forces, posing as S.H.I.E.L.D once again, get the top surgeon in the world to operate on him in hopes of implanting a "Hulk Out" button in his head. Of course both the surgeon and anesthesiologist know Banner/Hulk, successfully perform the surgery and wake him up before the implant can go in. Banner finally turns into the Hulk and escapes, later being picked up by the real S.H.I.E.L.D. His Hulk transformation does not heal his injuries and Banner is literally re-learning his ABC's on one of the following pages. I'm not sure about you, but I don't read the Hulk to experience the trials and tribulations of learning to tie your shoes again. 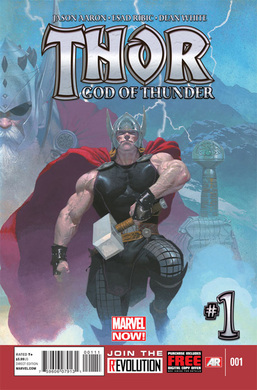 At this stage I will NOT being renewing my subscription when it runs out. Get your act together Marvel! In all honesty, this lack of quality control has come as a surprise compared to the Thor: God of Thunder comics (also subscribed). That series has been amazing in both the art and writing departments from the start. I highly recommend starting from the beginning with the God Butcher trade paperback (#1 - #5).

Once again, in the eternal debate of who would win between these two powerhouses, Thor comes out on top big time.

Now where's my mead horn...
Comment
To the Top